Castles are no doubt magnificent structures that are not only beautiful to live in but learning their history and how they came to be is quite an adventure. King Edward once mentioned how he almost bankrupted the treasury while building his castles in Wales so for a fact; it is not cheap to construct one. Constructing castles especially in the middle ages was not only a challenge but the maintenance wasn’t easy which saw a lot of the castles constructed abandoned and used by the military such as the popular Edinburgh castle before it was restored into the magnificent structure that you know now.

The first step was getting an architect to come up with the design and location of the castle. This would take quite a while since it was the most important stage before laying the foundation. Next was finding adequate workers which could go up to 3000 workers who included quarrymen, diggers, carpenters, and masons. Assembling such large numbers of people was not easy considering that the means of communication wasn’t yet developed, but they found a way to.

Castles are, by definition, fortified buildings occupied by royalty. The keyword being fortified which means that literally, nothing should be able to bring it down and for that it would require land that is strong and can be manipulated when constructing the foundation. However, most castles are constructed on a rock or hill which makes the construction even harder and you can easily spend up to 10 years working on the base only. 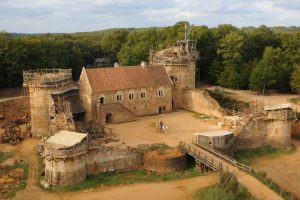 Project Gueledon is the most recent castle to be constructed a project that was initiated by Michel Guyot and Maryline Martin in 1997. It was expected to take up to 25 years to be completed but thanks to modern technology and adequate manpower, it was completed in 2006. Given this comparison, you can only imagine how long the work would have taken in the middle ages where there were no cars or technologies to boost the progress.

The most common building materials were rocks, stones, sand, and oak. Materials were moved by horse-drawn carts to the construction site where there were workers who would work on the materials to make them usable. At the site there were also workers who were in charge of making mortar (used as concrete for sticking the rocks together). This was made using water, sand, and lime while the stone workers did the actual construction.

There were a lot of problems in the construction process that further elongated the process such as war where the rival sides would try as much as possible to frustrate progress by stopping the delivery of materials to the site and killing the workers which caused a shortage of manpower. The decorators would then come in the final stages of the construction to beautify the castle as needed.

After the completion of the castle, the first to move in was the military and their forces as they needed to secure the castle before the royals move in. These days many of the castles in the world are used as tourist attractions that earn governments a lot of money which is why a lot of them first get refurbished before the doors open.